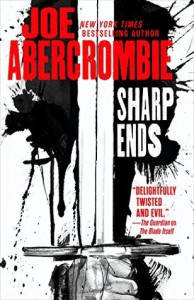 Sharp ends is a chapter in Red Country, Abercrombie’s sixth book, and -quite aptly- also the name of this collection. He appears at ease writing short fiction and it was pleasant to read again about the First Law’s characters. The stories are organized more or less chronologically, with the date near each title, this way it’s possible to approach this collection even while enjoying the main series.
I was underwhelmed by the Shattered Sea's trilogy so this felt a bit like a homecoming. I liked them, particularly the The Javre and Shev ones, but I wasn't overly thrilled because most were episodes, with few compelling elements. I was looking forward to the Glokta one but it was too short, and thus disappointing. For sure this book accomplished one goal: I really want more First Law tales.

Gritty, bloody, hilarious, witty and dark, this is mandatory for any fan of the main series; for all the others, it’s not the best entry point into Abercrombie's work because most of the stories don't stand alone if you don't know the characters.

Put a few men with swords together, even men with usually pleasant manners, and it’s never long before they’re all acting like animals. It was like old Threetrees always said –a sword’s a shitty thing to give a man. Shitty for him, and shitty for everyone around him.
Tweet