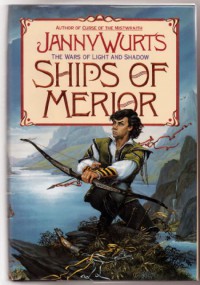 A new amazing journey into the world of Athera featuring returning and new characters, several different factions and interests, powerful world-building and a larger-than-life story expertly woven by the never-ending imagination of Janny Wurts, a master of delivering events presented from new angles, whose facets often revise the reader opinions at every new turn.

The story opens five years after the tragic events in Deshir, the two half-brothers, ripe with their legacy gifts and blessed with longevity by the Five Centuries Fountain, are hopelessly compromised by a deep geas-inspired mutual hatred spawn by tragically different reasons, and carry on with their lives in a so diametrically opposed manner: Lysaer, tall, blond, charming, a master of statecraft and sole repository of the power of Light, with the support of Etarra pushes a common cause and marches to found his new kingdom in Tysan. His sole purpose is to rid the world of Athera, even at the cost of great personal sacrifice, from the threat of the Master of Shadow. Said Master, small and lithe Arithon, conflicted and desolate, after the tragedy of Deshir and the loss of his mage-sight finds a bit of solace in cultivating his greatest gift and in running away from Lysaer and the world, lest he gives in again to the powerful compulsion of the hate-geas imposed by the mysterious and only temporarily tamed Mistwraith.

However, while the scion of the High Kings of Tysan earns the admiration of his natural enemies, the Townborns, and the enmity of the traditional supporters of the Kings rule, the Clanborns, and pursues his strategy of creating an alliance against the Master of Shadow by reconciling city factions and massing his army, his elusive and quiet brother desperately guards his privacy and intentions, with the result that many only perceive "the ironies of Arithon's nature and see nothing beyond surface paradox" and conclude he is a threat to their world’s balance, paramount amongst them Dakar the Mad Prophet, one of the most interesting character of the book.
But indeed the truth is not so simple.
The conflict that is taking shape has a multi-layered quality of complexity, and the reader soon realizes that each party, in championing interests often diametrically opposed, has a moral high ground they adhere to even if it is sorrowfully wrong or misguided. An incredible example of the credibility and effect of this is when, at the demise of a character certainly not loved, I felt regret and sense of loss.

Both warned on their birth world that “the powers of mages and the burdens of a ruler make an incompatible legacy”, the princes keep the tenet at heart. Lysaer hearkens his sire’s words and strives to be a good and compassionate leader, "a mind undivided between the laws that must govern humanity and the uncanny secrets of the mysteries", thus discarding any possibility of redemption of his mage-trained half-brother, taking bitterly upon himself Athera's plight and to pass judgment.
Arithon upholds this sorrow-taught conviction, too. He tries to avoid all conflicts, shunning the help offered by the Clans which feel threatened by Lysaer policy, and painfully tries to hold onto his uncompromising integrity, no matter the cost. But his empathy, his compassion for the suffering of others, which are a great contradiction in his heritage and experience, show a man so damaged that very few can really understand the deep motivations behind his actions.
The princes’ ambivalence foils any attempt to truly frame them, yet no one meeting them is left unchanged, for better or for worse, and such encounters lend new point of views and nuances for the reader to unriddle a part of Arithon and Lysaer inner selves.

Inevitably, the Master of Shadow and the Prince of the West (both extremely gifted and capable of refined subtleties, of masterminding complicated plans of actions and counteractions, to all outer appearances so sure of themselves but indeed far from perfect and heavily burdened by the natural frailty of human character), as their strategies unfold, are going to have a worldwide impact on the warring and magic-wary Five Kingdoms of Athera.
On this layered stage, the Fellowship of Sorcerers, bent on finding a cure for the Mistwraith curse and guarding the future of Athera, fitting the events to their own agenda of neutrality; The Koriani witches, embittered and set on restoring their former glory, locked in a silent rivalry with the Sorcerers and sure of the righteousness of their quest to preserve their World's balance by opposing Arithon’s unpredictability.
To the tapestry of the events are also interwoven the plot threads of single individuals, a bitter widow who is afraid of the sea, two young siblings yearning for their place in the world, a disgraced captain... all their actions count and represent a fundamental element in the story. Not by chance, along with the coherent plot developments and the masterfully managed growing cast of characters, the lines of morality and certainties blur even more, good and evil truly "depend on where you are standing" and the rich twists and surprises sweep away the reader in an incredible variety of settings, landscapes and encounters.

The story never loses focus, simply all the details matter and make for great entertainment; moments of levity and gravity are genially interspersed and concur to the bigger picture (if I thought the mayhem at Jaelot’s gate was hilarious, the scenes in Alestron armory are absolutely precious!).

On the writing style, I will not dwell much, but I will never stop singing the praises of the author's great mastery of language, and her ability to paint scenes and emotions with words. Her stories build slowly, but perseverance is highly rewarded with epic journeys of the utmost intensity.
The more I read, the more I see why Janny Wurts is really a star of fantasy literature. Anyone who loves deep, intriguing, challenging, unique stories with characters who encompass the full spectrum of human nature (not just the bleak, not just the good), able to constantly amuse, surprise and move the reader, cannot absolutely miss her and The Wars of Light and Shadow.
Tweet