Song of the Beast 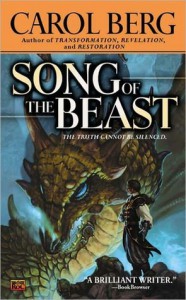 This book and its author are a stonking discovery. I’m a fan of Janny Wurts ([b:The Wars of Light and Shadow|28660|The Curse of the Mistwraith (Wars of Light & Shadow, #1)|Janny Wurts|https://d.gr-assets.com/books/1328835513s/28660.jpg|1945432] is my favorite epic fantasy series ever) and Carol Berg was recommended to me as a not-to-be-missed quality fantasy author with a gift for prose, well-rounded stories and characterization. I decided to start with this book since it’s a standalone and the summary, with the element of music as part of the plot and a mature protagonist, intrigued me.
It also sounded like traditional fantasy, with Dragons, Bards, Chosen Ones and Evil Kings; fine by me, originality is not of paramount importance as long as the story is entertaining and the characters interesting to read about, meaning ambivalence, spontaneity and unpredictability. This book truly exceeded my expectations, the traditional fantasy tropes are skilfully rendered and its main strength is Berg’s narrative technique: the story never flounders, I was emotionally involved and I couldn’t really put the book down, even if it’s neither a pacy romp with break-neck battles nor a complex character-driven play of oblique intricacy.

There is a single plot line and a linear progression, with depth and emphasis on the protagonist’s development which I liked very much; truly all the characters are not banal, even the stereotyped ones merge beautifully in the tale because all the motivations are complex, entwining, entrenched and changing. There were some details that puzzled me a little, but the story moves forward so sinuously, there’s both action and introspection, it feels very fresh and immersive.
Actually, this simplicity is truly deceptive, there are several plot twists and the structure of the work is consistent and engaging, to say nothing of the rhythm which is carefully researched throughout: the intensity never wavers, it builds steadily and increases when the story reaches its peak. When I was reading I noticed none of that, I artlessly savored the tale and let myself go with the flow, it came so natural. Now that I am thinking about it, two Berg’s books strong (already read [b:Transformation|618196|Transformation (Rai-Kirah, #1)|Carol Berg|https://d.gr-assets.com/books/1388179994s/618196.jpg|1198836] for good measure), I see the pattern is deliberate, and effective. The narrative is in first-person, mainly told from Aidan viewpoint, but a few other characters share the lead and the shifts are handled ingeniously, also seeing certain scenes from other vantages enhanced my experience and never caused confusion.

The introduction grabbed me at once; the protagonist and the background are disclosed very gradually, enough to pique my curiosity but not too much at once as to mar the harmony of the reading progression. The description of Aidan, of his trauma and inner dilemma are very poignant and I promptly sympathized with the bard and his terrible imprisonment. Seventeen years before he had everything. Cousin to a king, a skilled musician the like of which has not been seen for years, beloved of the gods, “he had been twenty-one, impossibly healthy, and filled with the unutterable joy of spending his life doing what he loved most”.
He is a standard fantasy good guy with a twist, because he’s strong-willed, he clings to life but he has lost any purpose, he is so scarred inside and out that even the simplest things escape his grasp. Filled with the dread of not knowing why he was so harshly silenced, and why he was so suddenly released only to be chased again, his gift lost, he slowly reinvents, embarking in a difficult journey “to unravel the puzzle of his life and find a path that was not solely the way of vengeance”. But how can a man who cannot undo the past and cannot see a future find something to live for, make a sense of his longings, all the while preventing those who help him from dying?
The perspective starts to widen as Aidan learns to be human again, and rises above the most basic instincts. Other characters enter the stage and the mystery behind –and around- the fallen bard grows along with the conflicting interests of the various parties. In the eye of the storm the most powerful weapons in the realm’s arsenal: the dragons and their eerie, enigmatic calls.

To sum up my impressions: the world building is delicate, enough to flesh out the action but it never gets overly detailed. The tale is exquisitely narrated, classic fantasy with some turns which I didn't anticipate for the most part, on the contrary, I was eager to know what was going to happen next, and how. Thinking about it, the tale is simple, yet irresistible. The ending was satisfying and the building of tension to delivery impeccable, the last chapters have a gradual and neat tying up of the plot. The characterization is the forte of the novel, the various sides are not so clear-cut and it was really engaging to read about the clash of cultural heritages and personal interests. The romance subplot is nice, the theme of love has an intriguing take here; the element of music and the ethereal descriptions of the dragons’ mysteries have a strong emotional impact, too.

Beautiful. I can see why a fellow fan of Janny Wurts should not miss this author - and the other way around, too: Berg writes adult fantasy featuring solid plots with great prose, no absolutes and focus on characterization (though Wurts’ style is unmatched). I've liked her short story in the [b:BLACKGUARDS: Tales of Assassins, Mercenaries, and Rogues|23156342|Blackguards Tales of Assassins, Mercenaries, and Rogues|J.M. Martin|https://d.gr-assets.com/books/1409823447s/23156342.jpg|42703565] anthology, I've read with delight this novel and Transformation, now I think it's high time for more of her skill and imagination, possibly in a multi-POV book.

"I, too, was becoming something new. Something unknown."