The Way Into Magic 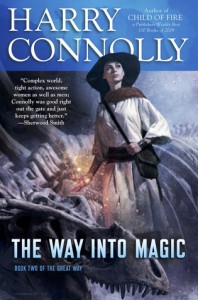 Nice continuation of The Way into Chaos. This is the second book of a trilogy, and it shows a bit since it’s very focused on preparing the ground for the delivery of the final volume. However, I liked it very much on its own, easily immersing in Catzia’s self-discovery journey and Tejohn's adventures. The pace is somehow slower, but the mystery behind the grunts deepens as the whole of Kal-Maddum, even several factions held too long under the thumb of the royal family and the infamous scholars, is finally realizing that the fall of the Empire may not be such a joyful occasion after all.

People end up suffering in times of upheavals, and the stage is particularly ripe for giving vent to old hatreds or full rein to petty ambitions and grand schemes, or simply for seizing the opportunity to overturn ancient prerogatives. But when, if, realization of the full scope of the peril dawns, it may be too late to influence the outcome. Against all odds, Tejohn and Catzia are determined to find the truth and a way to stop the invasion.

I really enjoyed the separate (yet connected) plotlines and the small, well-tended cast of characters, particularly the two protagonists, a one-time poet warrior and a teenage scholar daughter of a traitor, so different in age, experience, motivations and goals, but both unstintingly applying their talents to find a way forward.

“The best way to deal with a scholar—or wizard, or whatever these things were—was with a piece of sharp metal, expertly applied.”

Tejohn is not one for intrigue and manipulation, he is a great fighter, a commander with inborn authority and an able tactician but he is honest and straightforward. He has faced war and a most dreadful loss, turning his grief and fury into the desire to protect the Empire. Ironically enough, his position as royal tutor at court stems not from his fighting prowess, but from a song, written pouring all of his misery into his creation. With all his being, he’ll do anything to stop tragedy from striking again, and stay true to his prince.

Catzia on the other hand is still searching for her life purpose. She has been fending off for herself in a palace full of scholars and resentful servants, carrying the burden of her surname but also being allowed the opportunities of a privileged upbringing. Always one to treasure her grudges, she has learnt to bide, to hide and protect herself, to think of others as enemies, to lie and deceive. Her only concession is the friendship of the other hostages and that of the prince, the son of the very same rulers her father has once rebelled to. Possessed of a budding talent, she will soon discover that, for a scholar, there is more to going hollow than to just be void of emotions....

If the first book focused more on Tejohn, the second one is much about Catzia, her reactions and personal development.
The story is filled with action too, and I particularly liked that the characters' behavior is very sensible. They see, act, move and question things in a way I understand, and do not plunge headlong into peril just to prove they are invincible or something; of course they face plenty of obstacles and hazards, but I always appreciate characters who take seriously the business of staying alive.

Furthermore, the tale features an original mix of races, peoples and civilizations, with interesting reflections about culture clash and racism which add to the plot and give some clues about the invasion to readers and protagonists alike.

“To be extremely brave, a person ought to have no imagination at all.”