Splatterism: The Tragic Recollections of A Minotaur Assailant 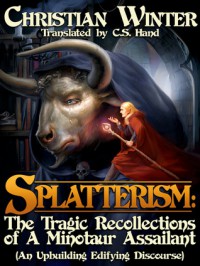 Dear author and translator, you are evidently widely read. This is clearly a drug-induced story, full of quotes, gore and witty dialogues. Anyway, I have a penchant for poet-warriors and blood-drenched philosophers trading views on Universal Truths while perpetrating genocide.

“I wonder which dies first—your humor or your hope”

This novella is a prelude for a longer tale, it was fun and I want to see if the story is going somewhere at all.
A minotaur riding a pink-maned unicorn? Now. Phantasmagoria? Ah…

Right, the story: Scammander, the greatest wizard of all time, has allegedly forgot his magic and looks like he doesn’t know what he’s about (“but he had not forgotten how to lie, steal, and abandon his friends in a time of need”), then he meets Evander.
Evander is a Minotaur who sought suicide on his birthday and accidentally chose a bottomless well and landed on a couple of witches who were keeping the amnesiac sorcerer captive.

So begins Evander’s quest for death and Scammander’s education of yet another “errant scion” in the ways of murderdom and poetry. The unlikely heroes journey around an unspecified world trotting through magical gates on a merry killing spree (or on a vengeance mission; for the greater good Evander and some others concur there is no need to let humanity live a moment longer. Not sure about Scammander's motives though).
There are flying ships, legendary minstrels, scantily-clad mature women warriors, ogres, goblins, wraiths, dragons...

"You can tell how vicious a society is by how tall its banks are."

The writing is deliberately convoluted and rich, a pageant of rhetorical figures and smart lyricism, cynical remarks and searing-sharp verbal duels. I have a weakness for adverbs and the English language so this hits a soft spot indeed.

The tones are obviously sarcastic and dark and I enjoyed both the prose and the bizarre characters. Interspersed with the philosophizing, there are lots of splatter scenes as Evander hacks and slashes in his pursuit of Justice. The violence is graphic but so exaggerated that it’s not disturbing, but then I always appreciate a fair bloodbath.

The novella reads more like a series of disjointed encounters than something with an actual plot, not least of all that of Evander and Scammander, then around the end all the gamepieces fall into place and it seems there is a thread after all. The logic eluded me; I’ll see how the story unfolds in the second installment, maybe I’ll catch some answers (if any. Oh, and I was right about the drugs).

“A lot of good silence is ruined by speech”