The Shield of Three Lions 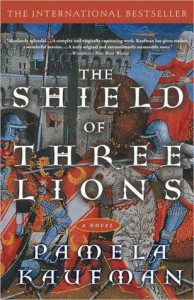 I picked this one expecting a solid historical romance fiction book set during the Third crusade with young adult flavor.

Sure enough, the protagonist is an eleven-year-old girl, and the plot is linear, a coming-of-age-quest story with gender-bender elements but it is, by my standards, wholly adult. First of all Alix, the protagonist, is basically the only character so young, then the book deals a lot with very delicate subjects, ones that may be out of the comfort zone for some, like rape, ghastly superstitions, the treatment of women as chattel, 'peccatum illud' and sexual awakening at tender age. However, the culture is the Middle-Ages' and the whole story is from the point of view of child Alix, certainly not well-versed to worldly affairs and perils, but all her experiences, the sorrow, the joy, the horror and the feelings she discovers are conveyed through her eyes and untried perceptions, rendering some crude passages and the moral decay behind the gilt with appropriate tact.

The historical background is really a protagonist in itself, the beginning of the Crusade from England to France to Sicily to Cyprus and Acre, it feels vivid and it is probably accurate, along with the right dose of speculation and fiction.
I never had a strong feeling of deliberate gruesomeness but the author goes a little for shock value, in the historical events and most prominently in depicting the medieval society of the time.

Welcomed tropes, plot stretching, time skips, improbable expedients and convenient bends are also present, not too obtrusive for the whole structure of the tale, the historical part is surely stronger (including a certain irony on the Church, the "sheep masses", the game of kings and religion in general) than the characterization or the plot anyway. I had an easy time accepting what was going on, after all some aspects were so exaggerated (like the impromptu I-am-a-boy antics) I think I was expected to overlook the fantastic.
The protagonist is compelling but not always consistent, she is terribly naive in a scene and a consummate manipulator in another, but on the whole the story flows nicely and I liked it. The portrayal of Richard The Lion-Heart is a mix of history, myth and speculation, oh yes I liked it. The Scot protagonist speaks a very peculiar dialect, I guess it may be another technique of the author to stress authenticity, a bit confusing at first since all the others speak modernly with a choice of archaic colloquialisms or expressions like "I trowe" or sooth supplanting truth. Not detracting.

In short, a nice read, light on characterization, entertaining on history, even-paced and surely not lacking in humor. Of course I'll read the sequel.
But I wasn't really prepared to an encounter with Robin Hood.
Tweet