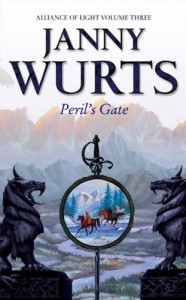 Awesome ending to an awesome book. I have finished Peril’s Gate so I am slightly more than half-way through the series and seamlessly enjoying the journey so far. The latest developments of the story really prompted me for a look back at the series from where I am. I loved the series and I had high expectancies, but the emotional impact of this book, along with the revelations, the grim, the hope, the brutal pace and the unforeseen twists of the story, all served with a gorgeous writing style, had me totally, utterly and helplessly enraptured.

This is a series that sticks, within. And I don’t think time will prove me false (to date, I’m reading Stormed Fortress, the end of the Alliance of Light Arc, I am basically devouring the pages, and decided to finish this review before adding too many layers of impressions). Peril’s Gate, which is both deep and fast-paced, triggered all sorts of considerations.

I guess this is the “tipping point” in the Alliance of Light Arc where the story starts to run back over itself in bigger and bigger ripples, where the unveilings are moving all the markers (yet again, last time was Fugitive Prince where the conflict acquired a worldwide scope and the stage was set accordingly) and shift my perspective as reader, at the same time as things pick up speed, going forward. Also, all the books offer both action-packed scenes and more explanatory chapters that deepen the knowledge and the mystery. This style adds to my enjoyment immensely. Immediately after this book I've read Traitor's Knot and the story is even intensifying into convergence with no letup in pace. Wurts has proven herself a master of suspense, the delivery is there, and with each title in the series, it builds tighter and faster.

Original, trope-upending and smart smart smart plot. The story is clearly not linear, it progresses in spirals and the reader's viewpoint of events continues to rise and deepen, and to re-form the prior awareness; Peril's Gate proves the point with stark clarity, this kind of folding back on the threads to open up more information the further one reads requires some focus, and this progressive shifting of the vantage narrative technique relies on the fact that all the previous books have been read. Being on lookout for nuances while going with the story flow is one of the many layers of entertainment I love in this series, all the more now, because I'm aware there are many subtleties at play, of different nature (this adds to the game immensely). The story spans many years and it's divided in logical Arcs, but the access point I would recommend in hindsight is, indeed, book 1, The Curse of the Mistwraith. Or, for a twist, this very same book, Peril’s Gate, where the convergence hits most heavily. The long range nature of this tale is truly truly amazing, the longer I read, the more rewarding the experience gets.

Harmony and balance. The story can really verge on the grim, bleak and bloody, but it is always, if not outright, followed by transcendence and even the grittiest subjects, handled with the gloves off, integrate with artistry and purpose. This goes for the bright and humorous facets as well. Wurts does not want to shock graphically, but she successfully evokes the reader's emotions to experience the story for himself, and the series draws off the full spectrum in human outlook, there is beauty and horror, grace and downfall - the full balance is present.
The world of Athera is very deep, very high, and restricted by a precise compact from certain kinds of development. If I ever thought to miss multiple continents full of different flavors of strife (which I didn't in this case), it becomes clear there is a reason for the selective focus, particularly the avoidance of story loose ends (no sprawl!) and the complex, huge worldbuilding which lends solidity to Athera itself. Peril’s Gate shows quite clearly why many aspects of the world were disclosed very gradually, even if the workings of, say, the Sorcerers or the Koriani are described in detail in the first books, where the knowledge as the whys and hows is limited.

The prose, ah! Painting words. The rich style fits the story; it is an element in its own right, for both the serious and playful parts. It is meant to create an immersive reading experience and it reads extremely smoothly when the reader comes to expect to visualize and sense what is happening in the book. The final chapters of Peril’s Gate are a fitting testimony to the many techniques applied and the role played by the reader emotions during the characters ordeals. Janny Wurts writes with purpose and never neutrally. She marries the complexity of the English language with the complexity of the story and the characters. A rich use of adjectives often arranged in unexpected combinations enables her to express all the nuances of what is real and what is perception, and her whole narrative seeks out a kind of precision that goes beyond simple descriptions and dialogues. From the pages one can feel her background as painter and musician, and her experiences with sailing, horse raiding and mountaineering, so infused in the action.

Deep characters and deep motivations. All the characters are complex and layered. I interpreted them differently as the story progressed and shifted my perceptions, the focus is on depth anyway, and much care is put into characterization and study of the human spirit, in all its forms. Some are not predictable at first: Arithon, Lysaer and the Sorcerers can be hermetic in the first book, the reader is not spoon-fed the “truth” or the whole logic behind their behaviors, and one is sometimes lured into false perceptions coming from unreliable POVs, and deliberately shown just a little insight pertaining the active forces of Athera and the real plight of the land. More pieces of the puzzle click into place in the following books, but never all at once or in sequence, and the cohesive picture starts to reveal itself. I like to engage my brains, and part of the fun of this series and its layered plot/character structure is, after all, the clobbering of my assumptions headlong.

Huge, insane amounts of research behind the descriptions, and of planning behind the scenes. No coincidence that hints or buffling facts or simple happenings in one book lay the groundwork for whole scenes, or a massive revelation one or even more books later. It means it is carefully designed, tended, built and delivered to maximum impact. After being at the receiving end of many such surprises, and particularly now that I am mid-series and see a fuller picture, I clearly realize that if part of the initial story is focused on details, context-shaping and the whole series never features an omniscient viewpoint, everything is necessary to let the tension grow and deliberate to converge to a point where there is no slowing in the pace at all and the reachable heights of fun are most rewarding. There are many intense climax moments in the series, but Peril’s Gate goes further. I think the books challenge clear sightedness, and invite people who like thought-provoking, non-linear, unpredictable, solid plots and who like books that want to be courted, which don't let the reader get it all at once; there are lots of events and sweeping sequences and hard facts in the starting volumes, along with the introduction of the characters, but also questions, which get answers in time, doubt not. Payoff is the key. Hats off to the author, who never sacrifices coherency for narrative expediency and shows adherence to a brilliant, original design.

When I first "discovered" Janny Wurts through her impeccable fantasy standalone gem To Ride Hell’s Chasm (totally recommended as entry point to Wurts work), I had not been reading epic fantasy for some time and I was surprised to be so powerfully affected by the Wars of Light and Shadow series, I didn’t think I could resonate so much with the characters of a world so entrenched in magic. Yet the element that I though a liability worked marvelously well for me, because there are no omniscient characters or lack of rules here, not at all, there are humans with their merits, flaws, personal histories and inclinations living in a very complex and superbly designed world, with its governing principles and dynamics. The mixed opinions about the first book, The Curse of the Mistwraith, also puzzled me, but now I’m totally happy about the choice to read it and decide for myself, because it would have been a mistake to miss this glorious journey.