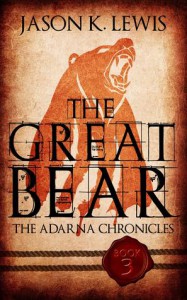 This episode concludes book 1 of the Adarna chronicles, the ending is open but not abrupt, and some mysteries are finally revealed, others thicken and new ones appear. The main characters are still Martius and Conlan, but as it happened in the previous book, they are supported by other characters, which often offer their point of view and thoughts.
However, though interesting, this installment suffers from over-explaining and again by redundancy of information, the main battle scene is confusing and on the whole, the writing dawdles a little. This is also the most ambitious episode so far, longer and with more worldbuilding, and the story is wrought from different angles as the points of view diversify; basically all the improvements in prose and descriptions seen in Phoenix Rising (compared with book 1) are present in this novel but with the bigger scope of events, the branching of the plot and the growing cast of characters I felt like this book was somehow missing. A bit as if, by wanting to simultaneously handle many elements (background, emotions, mysteries, explanations, character development, legion spirit, battle scenes, political strife etc.), things have partly gotten out of hand. While reading I noticed some inconsistencies particularly during the big battle scene, and the sudden understanding of what is going on by some characters is a bit too stretched considering their earlier reasoning and actions. Still, the plot is engaging and I like the characters, I liked all the Adarna episodes but my expectations are higher now, I hope the author will hone his skills and craft an engaging and fast-paced sequel.