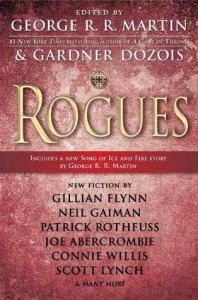 The introduction: really useful to A) know Martin knows his reads B) get good advice where to look for interesting rogues in sci-fi and fantasy books. I'm mainly a reader of new-century fantasy with a penchant for the grim, the dark and warfare, so it's good to broaden the horizons.

“Tough Times All Over” by Joe Abercrombie: just love Abercrombie's short stories set in his First Law world. A courier gets tangled in a duck, duck, (bloody) goose kind of race in Sipani, the Venice of Styria. Probably previous knowledge of the setting helps to fully appreciate this story, but it is an ironic, gritty and fast-paced standalone -and real fun!

“What Do You Do?” by Gillian Flynn: never read anything from this author, but this one was really good, I mean, creepy good and very original, about a girl whose line of business was hand-jobs and turns psychic because of carpal tunnel syndrome. But drawing a line between past and present jobs may not be that easy....I work in IT, I can emphasize probably?

“The Inn of the Seven Blessings” by Matthew Hughes: fantasy setting, a thief on a quest to rescue a god, evil magician. Cute.

“Bent Twig” by Joe R. Lansdale: badass trigger-happy rogues Hap & Leonard looking to save a girl. Very real-life dirty, lightly humored but still a punch in the stomach. Liked it.

“The Roaring Twenties” by Carrie Vaughn: night club for the supernaturally-gifted, in the '20s, subtle action and strong female heroines. Nice but I felt I was missing something about the background of the protagonists.

“A Year and a Day in Old Theradane” by Scott Lynch: I love Locke Lamora. And a short story about thieves by Scott Lynch is a superb treat. Fun, witty, unforgettable characters and great world-building, wizards and street lamps. Super!

“Heavy Metal” by Cherie Priest: sorry to say I didn't like this one. Started strong but felt unfinished, couldn't really get what was going on, characters got thrown in and forgotten. Meh.

“The Meaning of Love” by Daniel Abraham: yes, yes! Abraham's "The Dagger and the Coin" books are on my to-read list and definitely shuffled forward. Solid world-building, a prince and a problem-solver in a no-conventional-law city, a story about friendship and love with a twist.

“A Better Way to Die” by Paul Cornell: secret service tale set in an alternate contemporary UK, very intriguing main character Major Jonathan Hamilton, powerfully written, angsty and utterly complicated. Reading of the previous short stories "Catherine Drewe", "One of Our Bastards Is Missing" and "The Copenhagen Interpretation" surely can help, otherwise the world specifics can be *more than* a little confusing, and undermine comprehension, but it was so good I wasn't deterred & went to look for more.

“Ill Seen in Tyre” by Steven Saylor: a younger Gordianus' tale, about the price of wisdom -and foolishness- with a homage to Fritz Leiber's Fafhrd and Gray Mouser. Deliberately predictable, very entertaining.

“A Cargo of Ivories” by Garth Nix: nice couple of "insurance agents", named Sir Hereward and Mister Fitz, do a little house-breaking to retrieve some stolen...goods. A cheeseparing wizard, a thief, a basilisk, an albino mammoth...absolutely loved the dialogues.

“Diamonds From Tequila” by Walter Jon Williams: deliciously amoral. A Hollywood actor is shooting a movie in Mexico and gets entangled with 3D printing.

“The Caravan to Nowhere” by Phyllis Eisenstein: tale of Alaric the minstrel. Little happens but the description of the desert is masterful. A bit slow, but pleasant.

“The Curious Affair of the Dead Wives” by Lisa Tuttle: simple sleuth tale about a human being with a morbid need for a taste of death. Pretty disturbing for the kind of women cast.

“How the Marquis Got His Coat Back” by Neil Gaiman: a story set in London below. A purloined coat, mushrooms, a heavy predicament and absolutely fantastic and brilliant characters.

“Now Showing” by Connie Willis: fast-paced, thrilling, very entertaining. Going to the movies may not be as easy as it seems. Smart.

“The Lightning Tree” by Patrick Rothfuss: a Kingkiller Chronicle story so my opinion is probably biased. It is very very good story about a typical Bast's day in the village. Prior knowledge of the setting is preferable. What a trickster!

“The Rogue Prince, or, A King’s Brother” by George R.R. Martin: a Song of Ice and Fire story, 'nuff said. Essential prequel -focusing on roguish Prince Daemon- to "The Princess and the Queen" tale featured in the Dangerous Women anthology about the kin-war between Targaryens Aegon II and Rhaenyra. There's after all a full genealogy to delve into. How cool is that?