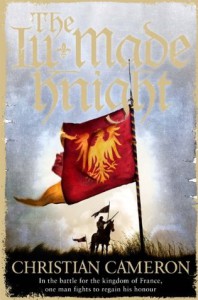 I enjoyed this stand-alone novel immensely, and I'm thrilled there's a sequel due in November featuring another period of the life of William Gold. This is a historical fiction novel, with the backdrop of the early part of the Hundred Years War, so 14th-century Europe. The tale is compelling and entertaining, narrated in first-person by the protagonist in a recollection of his younger years and of how he came to be a knight.
Prompted by Jehan Froissart (the main French historian of the period), whom he met along with Geoffrey Chaucher in Calais, he agrees to tell his tale and true to his word, William reminisces about feats-of-arms, war, the battle of Poitiers and Italy in his "own time and manner", as he forewarns. Indeed all the facts shared, while closely intertwined with real history, are sifted by the perspective and comments of the teller, who's aware all the time of his audience and who effortlessly keeps the interest piqued, letting personal events, facts, fiction, battle-action and historical background flow while recounting the story with a little cynicism, witty remarks, emotional cognizance and a lot of subtle humor which give the narrative a real turn-page quality.

As the story unfolds, you can feel William is really a son of a difficult, grim age yet also an embodiment of its contradictions: he endeavors to elevate himself, socially and morally. He strives to carve a path to success while he feels torn between trying to achieve -and believe- noble ideals, wanting to be a better man and the fact that he is easily swept away by the current of violent events; by habit, necessity and choice he often falls in the traps of complacency and takes the easy way out, embracing the horrors of reality and the greedy corruption of men; yet, through his own qualities, friendship, love, experience, lots of luck and faith, he accepts "to do what we must...but that need not be the sum of who we are", and takes heart. So the reader immerses in the life of this very brave and human knight, like a pendulum swinging between good and evil, whose extremes are clearly portrayed with the figures of Geoffrey de Charny and Bertucat "Bourc" Camus.

Speaking of his mistakes, William allows a little self-indulgence to slip but through and through he's able to laugh at his own shortcomings and have the reader emphasize with a life in a century so different.
You also get details, from the protagonist point of observation, of the politics, religion and economy of the time, which -as today- heavily drive the lives and behavior of all men, commoners and gentles alike, which help a lot to place the events, to try to understand that society, its way of thinking, and not to be hasty in judgment, at least for the novel and its characters.

The author seems to have a solid background in medieval history and is careful to relate facts with as much accuracy as possible. Moreover the engaging descriptions of armors, fighting techniques, military fashion and warfare are smartly spread in the novel, so you rarely feel a dimming in the flow of the tale, even during the waiting scenes.
Another plus is, of course, that the main characters and most of the minor ones are real historical figures and it had been a delight to google them.

What I also loved in this specific novel is that the author lets the fictitious events feel true -like what could have really happened in the "normal" life of the real William Gold or another men-at-arms cut from the same cloth-, and sure enough I really never felt a need for epic quests, sudden upheavals, nemesis drama or other arranged plot twists which I usually cherish in historical novels to keep me thinking "what's next"? I'm just glad I'm only a month away from the answer.

If you like reading about the late Middle-Ages, feats-of-arms, jousting, warfare, social inequities, chivalry and "preux" knights, routiers and what life was like in France, Italy and England in those turbulent years, don't miss this outstanding novel.
Tweet